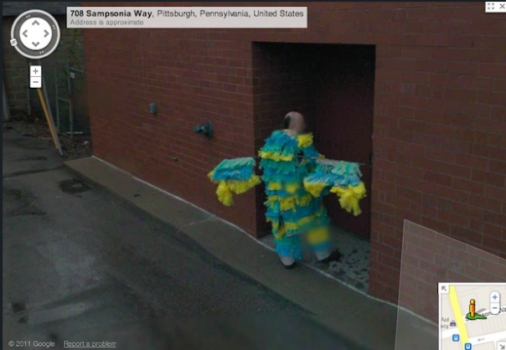 Google Street View has had problems with being accepted in several countries. In Germany Google gave up for now after people requested that their houses be blurred. In Switzerland Google is now shooting images after some modifications and restrictions were agreed upon.

But one thing that you always find on the Internet is people expressing how they don’t get that someone might be upset about Google Street View. After all it only shows things that are already public. The problem is of course, that there are different scales of how publicly something is known about you. And if someone puts information about me in a searchable database on the internet, that’s very public.

If you think about it, you do different things depending on how much control you have about who knows about it. Imagine you are hiking through the woods with friends when you and your best friend start swordfighting with sticks you found on the ground. You’re just having fun, being stupid. But if another friend starts recording you with a cellphone, would you continue? Maybe if you’re having a cool fight, but most likely a recording would just be embarrassing. In any case it’s different once there’s evidence of you doing something stupid as opposed to it just being a story.

Right at the top of the comments of that second article is a comment saying “in most european cities space and privacy is a precious commodity. I live in zurich and looking outside my apartment I can see the guy taking a shower next door” to which this response got a pretty high rating: “I’m gonna go out on a limb here and suggest some high tech things like drapes and blinds to solve this problem.”

So I’m guessing that the guy next door is not very annoyed that his neighbors can see him shower. Maybe he even likes the risk of possibly being watched. But I bet that if you were to take pictures of him showering, he’d get very upset.  If you were to then upload those pictures on the Internet, that’s going way too far.

Google of course goes even further and puts those pictures in a searchable database on one of the most visited websites in the world.

Showering while possibly being seen used to be a pretty inconsequential activity. But now this is a problem that needs to be solved by installing drapes and blinds. There are now situations where, even though you are in your own house, you have to hide where you used to not care.

But with Street View we are just talking about the front of your house, which isn’t as bad. But you still have the problem that people are fine with certain things being visible from the street, that they’d not be fine with being archived in a public database.

Maybe I am really poor or really rich but I don’t want my friends to know about that. It is now more risky to share my address with them, because it used to be that they would have to drive out to my place to find out how I live. Now it’s a Google search away. It is also now even more risky to do something with your house that expresses your personality. If I have a pink house, I probably do not want that to be known among my coworkers in the lawyers office. So expect even more houses to look same-y.

Right now it’s unlikely that something  severe will come out of the privacy issues with Google Street View. But my final issue is: Google Street View is a step towards taking away a final spot where you aren’t being watched. Even your own house has pictures taken of it and put on the Internet. And if it was just Google Street View, that would probably still be OK. But it’s easily apparent that it won’t stop there. People are only taking more and more pictures. And many of those are easily archived on Google Maps. And Google doesn’t care about privacy if it’s just linking to pictures uploaded by others.  They’ll happily post pictures of nude beaches on Google Maps and they won’t blur the faces on those.

And who knows what the next feature will look like? Imagine webcams being searchable on Google Maps. And what will the privacy concerns of affordable drones be? At some point you have to say stop.

At some point you have to say “it doesn’t matter that I did this in public. You have no right to put this in a public searchable database.”