I Wrote a Fast Hash Table

As others have pointed out, Robin Hood Hashing should be your default hash table implementation. Unfortunately I couldn’t find a hashtable on the internet that uses robin hood hashing while offering a STL-style interface. I know that some people don’t like the STL but I’ve found that those people tend to write poorer interfaces. So I learn from that by not trying to invent my own interface. You can use this hash table as a replacement for std::unordered_map and you will get a speedup in most cases.

In order to reduce name conflicts I call it sherwood_map, because Robin Hood Hashing.

It’s good to have bad jokes in your code. Other than that name though there are good reasons to prefer this hash table over std::unordered_map.

The main benefit of sherwood_map over unordered_map is that it doesn’t put every element into it’s own heap allocation. Less allocations give you a speedup because a) less allocations and b) more cache hits.

To be up front here is the list of limitations:

I think those limitations are OK.

Explanations for the tests:

In all of the non-insert tests I call reserve() when building the map. But I use a different number of elements for each test, so the overhead for building the map is not always the same. I also fill up the map until it has 85% load factor, which is the default max_load_factor() for sherwood_map. The default max_load_factor() for unordered_map is 100%, but for comparisons sake I use the same value for both.

The results are kind of what I expected. The biggest speed improvements are for lookups, and for when inserting into a map that has reserved enough space to fit all elements. I didn’t measure this exactly, but I expect that the main reason for the improved lookup time is that there are fewer pointer indirections, and the reason for the improved insert time is that sherwood_map doesn’t need to do new heap allocations.

I was surprised though to see that sherwood_map also performs better in almost all other areas. Only when there are many modifications to the map is unordered_map faster. Note though that this is not the case if you modify values that are already stored in the map. Only when you erase objects and add new objects is unordered_map faster. (updating existing objects is as fast as performing a lookup)

One thing that I’m kind of embarrassed about (because I just did a big post about this) is that sherwood_map compiles more slowly than unordered_map. I know why it compiles more slowly and I know how to change it, but it requires some non-trivial changes to the structure of the map. Maybe I’ll do that when I support allocator propagation. But C++ does make it difficult to predict how fast or slow your code will compile… (in my case it’s actually because std::swap compiles slowly, who would have thought…)

So when should you use unordered_map? If you plan to do lots of modifications to the map (lots of erases and insertions of new objects) or if you need your iterators and references to not be invalidated. Otherwise using Robin Hood Linear Probing seems to be a better alternative.

And here is a link to the github files.

gnzlbg in the comments pointed me to a Joaquín M López Muñoz  blog where he had done performance comparisons for hashtable implementations. I ran his same benchmarks and the results are… embarrasing. Let’s start with the results: 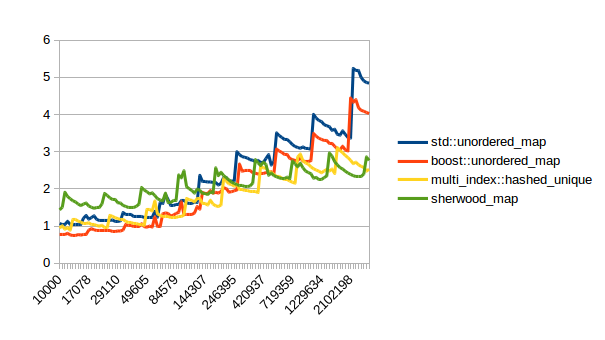 Reserving and then inserting elements: 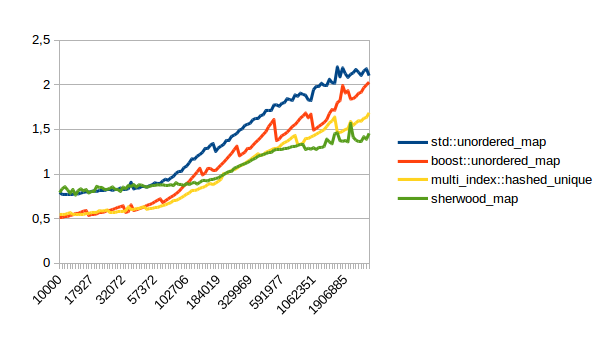 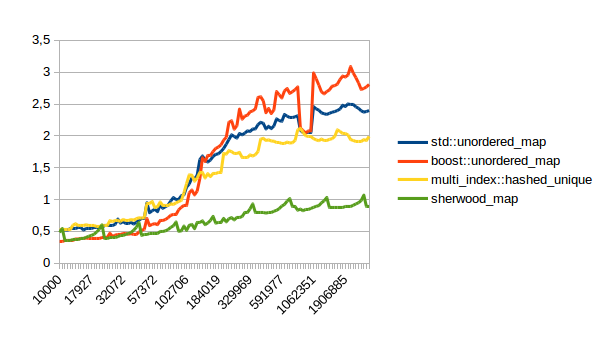 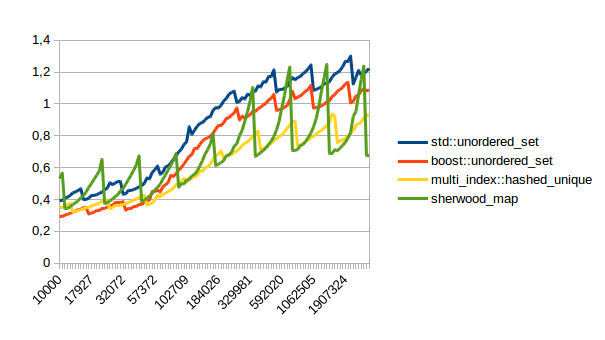 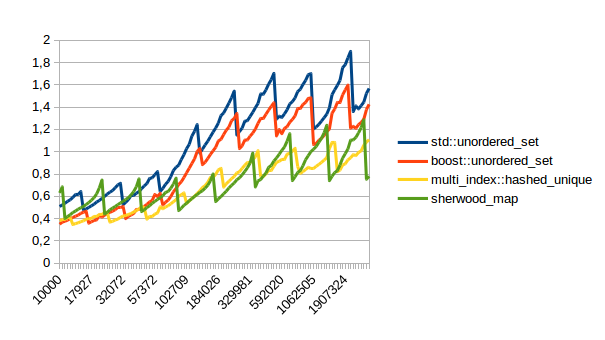 So what do I take from this? Time to optimize sherwood_map :-). I spend all of my time on the calculation for the bucket of a given index. The way you find out when to stop iterating in Robin Hood Linear Probing is to look at how far you are from the initial bucket of a given element. When you find an element that’s less steps away from its initial bucket than your element is from your initial bucket, then you can stop iterating because you know that your object is not in the map. Unfortunately that means that as you’re iterating you keep on having to calculate the initial bucket of elements that you walk past. So I’ll play around with caching that calculation. If that doesn’t work I could also change my bucket count to be a power of two. That’s frowned upon for hashtables because it increases clustering but the increased clustering may be worth it if iterating over those clusters to find your element is cheap.

7 Comments to “I Wrote a Fast Hash Table”